Updates and improvements made to the MapleStory Network this year.

We're pleased to introduce a new feature that is a first for MapleStory! Our developer, Exile, has worked tirelessly the last few months to implement Semantic Search for our service, starting with Discover. Semantic Search is powered by neural networks to allow for searching for items (and soon other resources) by merely describing what you're looking for.

No need to know

is called a Fairfrozen. Simply search for "spear made of ice" and you'll be on your way.

You can read the detailed blog post about this new feature here.

Other changes and fixes include:

Based on community feedback, we've made several changes and improvements to Digits including:

The dashboard has been given several design refinements including further improvements relating to privacy. Switching between private and public will now be reflected immediately on the activity feed. In addition, new characters added to a Watch List will now show up on the activity feed alongside other statuses.

The Dashboard itself has been updated to show more information on the sidebar.

We've reworked what was originally our changelog and re-launched it as a fully-fledged blog. You can now easily view and navigation directly to each update via a pinned sidebar (on tablet and desktop devices).

Ask and you shall receive! You can now set individual characters on your Watch List as public or private. This is a perfect way of showcasing your own in-game characters all in one place, or a collection of pixel-perfect looks.

You can now see at a glance if a character's global, world, or job rank has increased or decreased, compared to the previous day.

Profiles will now display public characters on your Watch List.

Resolved an issue where the settings pages may not be accessible and would result in an error.

The Compare page has been given several improvements and new features including:

Improvements were made to the backend to allow for the dashboard to load significantly faster.

Improvements were made to the backend to allow for all design-related pages to load significantly faster.

We improved the placement and design of the Compare and Watch List buttons to be easier to interact with on tablet and mobile devices.

Lastly, we resolved a bug where characters historical progress may skip a day.

It's been awhile since the last update as we've been hard at work on a trove of new features and improvements to existing services. We're excited to share these changes with you all today!

Introducing Digits, our detailed analysis service for in-game characters in MapleStory! This service builds upon the official MapleStory rankings to provide new unique information about characters such as worn equips/cosmetics, hair/face, and more.

With a MapleStory Network account, you can add any character to your Watch List and our platform will begin storing and displaying its lifetime progress. No two week cut-offs, no compromises. Just digits. To be as mindful as possible to NEXON and its infrastructure, we limit polling for new data unless requested by a player.

With Digits you can:

Additional regions outside of North America (Global) are planned to be supported in the future.

We've made the experience for MapleStory streamers much better based on feedback. If a streamer goes live on Twitch, their stream and chat will be embedded on their profile.

The dashboard will now show if your friends are currently live and provides a link to their stream on Twitch.com.

Other changes to profiles include:

In preparation for a major update and new features releasing later this year, we've updated any mentions of "characters" or "a character" to instead use "designs" and "a design". This means that the "My Characters" page will be renamed to "My Designs", and any URLs that contain the term character will also be renamed.

Our knowledge base has received some quality of life improvements to make it even easier to navigate through various resources. Item pages now provide a link to view other items in the same overall category (ie: Equipment), category (ie: Armor or Accessories), and sub-categories (ie: Hat or Sword).

In-game characters (from our new Digits service) that are currently wearing an equipment item will now appear on item pages, in addition to designs incorporating the item.

We've introduced a new design to activity to ensure they appear consistently across all devices, and avoid overlapping icons and character previews. Depending on the device, the preview image may be hidden.

Profiles now include show recent activity, including follows, designed characters, and content a mapler has liked. In the next update, we'll be adding additional privacy options including hiding activity when a profile is set to public.

Profile boxes were also redesigned to match the new look of activity and now include the profile's bio.

Lastly, we added the profile character to every profile page (likes, followers, etc), so that when sharing the links elsewhere, it'll always display in the link preview.

Improvements were applied to the backend that handled character deletion. Previously, any characters that were made by copying the look of another character would become inaccessible if the original character was deleted. This has now been resolved.

Improvements have been made to the dashboard to now display the name and avatar of liked characters. We also made adjustments to display "a character currently set as private" if a character is switched from public to private.

To better support all types of YouTube accounts, we now require the full channel URL, instead of just a username.

We've added the ability to display Twitter, Twitch, and YouTube accounts on your profile. In the near future, we'll be adding support for Discord accounts, although as we plan to have a fully fledged Discord Bot, we need to be able to properly verify ownership via Discord's OAuth and API endpoints. Safety matters.

The "Edit Profile" page has also received a major redesign and reorganization to make it easier to use for all maplers.

The changelog page has been updated to now allow you to select specific years.

The Fashion (hairs and faces) section of the wiki now displays all available colors for both face and hairs.

We've begun work on the dashboard, which will show recent activity from your friends (any profile you are following). This will include any character designs created, likes, and follows.

We are also experimenting with a "Recommended To Follow" section, found on the dashboard sidebar. This will highlight maplers from within the community such as content creators, notable contributors, or our team members.

In May, we focused heavily on making dozens of refinements and implementing changes based on feedback we had received since the beginning of the year. This brought major redesigns to all of our services home pages, numerous changes to our designer to perform and work better on mobile devices, and a new sign-up experience.

Our designer has received even more improvements for mobile devices based on additional feedback from our beta testers. These changes make it easier to view the character you're actively working on as well as slightly reducing the max size of the item list. 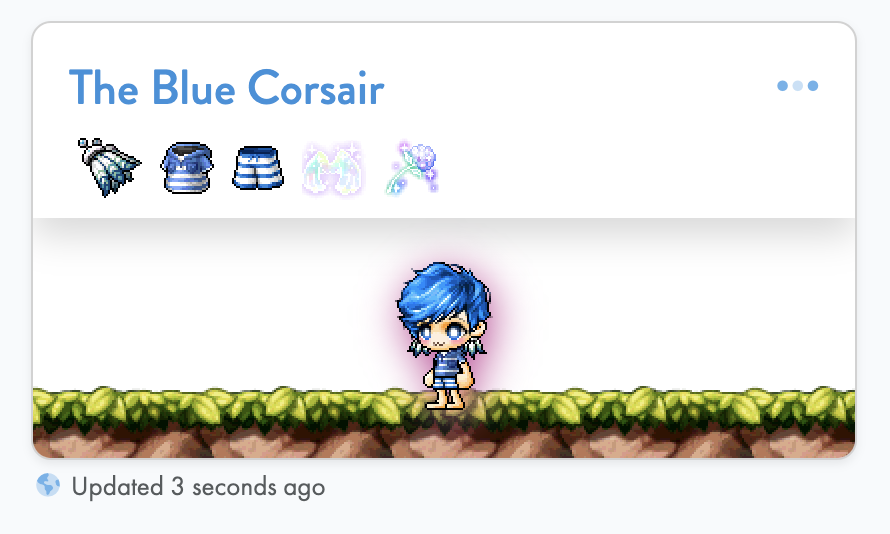 We also introduced character customization options, which allow you give your character a background based on specific MapleStory towns, in addition to a glow effect.

The front page of Design was reworked to include new sections for recently made public characters as well as a new layout that displays better on tablets and mobile devices.

We've begun work on Guides, our newest addition to Discover. The Guides feature allow content creators and recognized members of the community to write training, job, boss/expedition, and general guides for the game. These guides also allow for embedding a related YouTube video for listening or viewing alongside the rest of the guide. We're applying some finishing touches and will provide more information soon.

The knowledge base was completely redesigned to include new sections including top liked items, monsters, and fashion.

Profiles were completely overhauled to improve performance as well as resolving several reported bugs. All profile pages now display better on mobile devices, and we've made likes easier to access.

You can now follow other maplers and keep up to date with their activity and happenings on the network! For the moment, this just includes likes and character creation, but it will include other activity in the future.

Once the Dashboard is finalized, this will all show up there. ^-^

You can now search across all of our services via the "Search" link found in the navigation bar! Easily find other maplers, designs, or browse our entire knowledge base all in one place.

To provide better transparency, the Supporter page is now accessible without an account and provided benefits are now clearer. We've also pleased to share we will now provide discounts for the following groups:

Added a new Help Center which includes dozens of helpful answers to common questions and concerns. This also includes the ability for members to send in support requests in-house, which will then receive a response by email.

Our biggest update yet!

Here is the massive list of new features, changes, and improvements that we added this update.

In the spirit of free-to-play gaming, we've always offered our service for free, for everyone. In the past, we've supported ourselves via advertisement revenue to cover a majority of our server infrastructure and other running costs.

To allow us to provide more features and functionality to players globally, we've soft-launched the ability to support and donate to us via a Supporter subscription. For $2.00/month, this subscription will unlock features such as Dark Mode, hiding ads, customizable character backgrounds, and more coming soon.

New maplers will receive two weeks of Supporter trial before some features will be locked.

Don't worry, we won't be fully launching Supporters until June 1st and will share more information around this time.

We're on the verge of our public beta release! 🎉

To celebrate, we've officially launched our new logo, "Slim and Bub" who will be our new mascots. Together, they form a "yin and yang" keeping the Maple universe balanced and safe.

Other community-requested changes have been made including:

The developer dashboard is now officially launched and allows for registering your own project! Once created, you will be able to interact with several API endpoints relating to MapleStory Network profiles, characters, and game data.

By using OAuth, you will be able to allow other members to authorize your project to access and manage their own data as well when set up with specific scopes.

To add another layer of safety for maplers, we've implemented a "safe redirect" functionality to any links shared in user content.

Clicking on these links will now send you to a page that displays the intended URL and asks if you wish to visit it.